Roulette remains a game of chance. A person can bet on a single number or the colour of their choice. For most people, this means betting on a colour. Most people also know that the odds are not always in their favour, and this is why they choose to bet small. They don’t want a huge loss. On the other hand, a big bet could also mean a big win. That is exactly what it meant for one man in Las Vegas fifteen years ago.

Fifteen years ago, Ashley Revell made headlines when he won big at a game of roulette. His story was one that was read or watched by millions of people. Most people were shaking their heads, thinking about how crazy it was to make a bet like that. Other people were on the edge of their seats, scared to blink as they hoped that this man would win everything he wanted. There was something about the chance that he took that day that not only made people love him, but it made them want him to win.

Revell sold everything he had and took out a withdrawal from his savings account. He had a total of $135,000, and he was ready to bet it all. Millions of viewers watched in anticipation as he made the bet of a lifetime. He made a simple bet for red, which has 50% of winning. That meant that if it landed on black, he would lose everything that he had to his name and walk away with nothing, and do nothing, as he no longer had the things he had previously owned. Revell literally bet everything he could at the roulette wheel that day. When the ball landed on red, he managed to win a whopping $270,600.

Revell has been quoted as saying that when that happened, it was the best moment of his life.

Millions also cheered as they watched the look on his face when he won. Photographers captured every single moment of his expression, from the anticipation as the ball spun around the wheel to the very moment that it landed on that lucky red 7. This single roulette bet inspired thousands, including Simon Cowell who made the television show Red or Black.

Back then, Revell was only thirty-two years old, and he was in heaven. Years later, he decided to return to that very casino to celebrate the addition of a new single zero roulette table.

The new roulette table even celebrates that amazing bet that was made years ago. A special spot on the wheel, the red number 7, is now referred to as the lucky red 7. When the ball lands on the red 7 during the special Red 7 promotion, every single player at the wheel gets to enjoy a promotional chip that is worth twenty-five dollars.

The new roulette wheel can be found in the sports-themed party pit, and it is already one of the most popular ones at the casino. The memories many have of watching that moment on television instantly adds an element of positivity to this single casino game.

Read more in the links below: 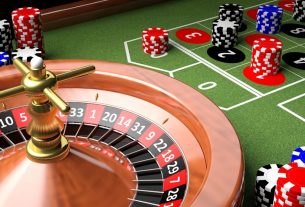 How to Play Roulette

Live Roulette vs Online Roulette: Which is better?